Just a 2-hour Ocean Jet ferry journey from Cebu City’s port, Bohol offers independent travelers a wealth of options both on and off the beaten track. The island province promotes itself almost exclusively through images of cute bug-eyed tarsiers and the majestic Chocolate Hills, and while both are fantastic highlights, in reality, it’s the snorkeling and diving on Panglao Island that brings in the crowds. After an active week of snorkeling around bustling Panglao, we were ready for some peace and quiet.  We hired a tricycle for 300 pesos and arrived at The Ocean Suites Bohol about an hour later.

With spectacular views of the ocean, our room had floor to ceiling glass windows to enjoy the seascape.

We spent most of our time in Bohol relaxing at the pool and shopping in Tagbilaran City, but we did manage to take a few trips into the countryside.

The Chocolate Hills are Bohol’s most famous attraction. They resemble giant mole hills and reminded us of the hills in a small child’s drawing. The chocolate hills consist of 1268 uniformly shaped hills ranging from 90-150 feet tall. At the end of the dry season the grass covered hills turn brown, hence the name. We arrived after the wet season and the hills were beginning to lose their green color.

Legend has it that the hills came into existence when two giants threw stones and sand at each other in a fight that lasted for days. When they were finally exhausted, they made friends and left the island, but left behind the mess they made. For the more romantically inclined is the tale of Arogo, a young and very strong giant who fell in love with an ordinary mortal girl named Aloya. After she died, the giant Arogo cried bitterly. His tears then turned into hills, as a lasting proof of his grief.

To this day, geologists have yet to reach a consensus about their formation. The most commonly accept theory is that they are the weathered formations of a kind of marine limestone on top of an impermeable layer of clay.

Another popular activity in Bohol is visiting one of many Tarsier sanctuaries, all easily accessible via taxi or tricycle.  The tarsier is one of the world’s smallest primates measuring 3.5 to 6 inches in height.  For the past 45 million years, tarsiers have inhabited rainforests around the world, but now they exist on only a few islands in the Philippines, Borneo, and Indonesia. In Bohol, the Philippine tarsier was a common sight in the southern part of the island until the 1960s. Since then, the number has dropped to around 700 on the island. Once protected by the humid rainforests and mist-shrouded hills, the tiny primates struggle to survive as their habitat is cleared for growing crops.

After spending some time with the tarsiers, we decided to have lunch at the Loboc River aboard a floating restaurant.  The restaurant sits atop a catamaran and slowly chugs up and down the river.  The river itself is nothing special but the lunch buffet of standard Filipino fare was tasty and inexpensive, the Mud Crab with Adobo was delicious.  Halfway through the cruise, the boat stops at a floating stage where local children sing and dance.  It’s very touristy but we enjoyed ourselves and it’s a fun way to spend an afternoon. 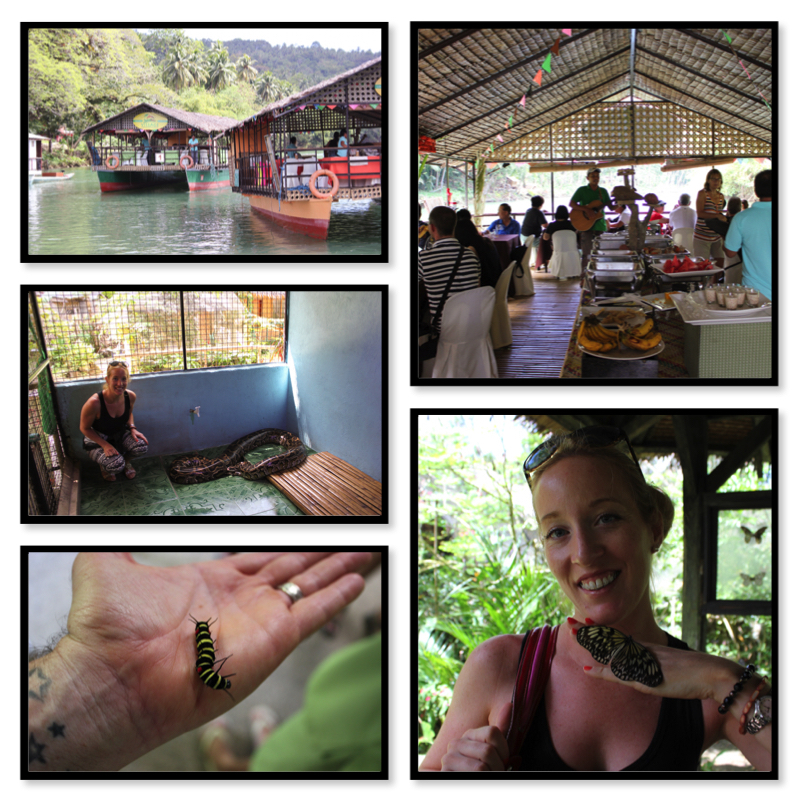 Boholanos still affectionately call their province the ‘Republic of Bohol’, in reference to the island’s short-lived independence at the turn of the 19th century. It’s an appropriate appellation – today’s successors of the republic are fierce protectors of Bohol’s distinctive cultural heritage. The 7.2 magnitude 2013 earthquake killed more than 200 people and destroyed several of the island’s majestic Spanish-era churches. Many churches remain down, but few other outward effects of the catastrophe were visible.